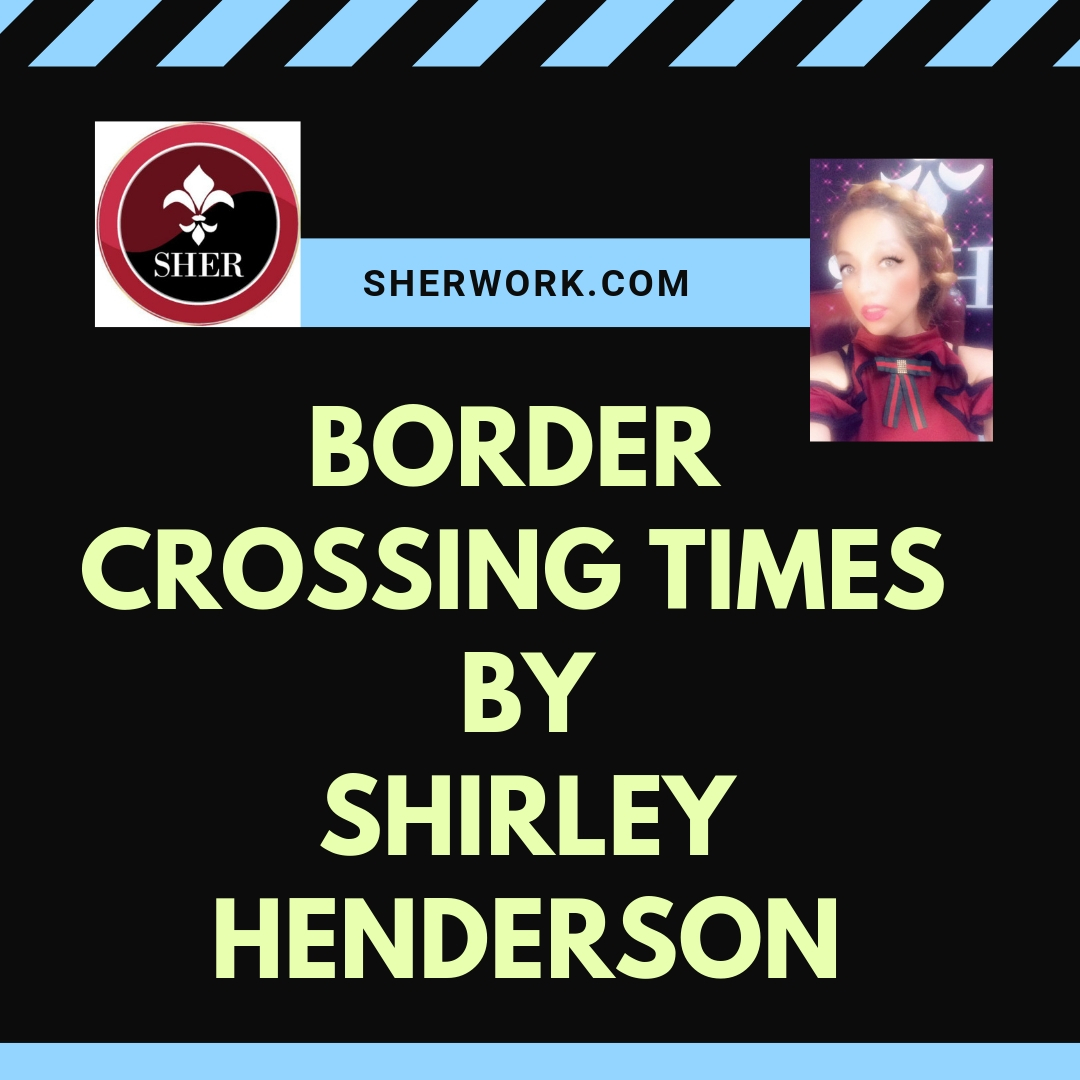 Why in a bilateral border, the crossing times need to be less than 5 minutes? Because imagine that you are a worker that need to get in time to check in, or you have a doctors appointment, or student that will have to go to school for the next 8 years of your life, four years to high school and four yeas of college and you have to add the crossing border time to your daily routine, it is just insane, this physical and psychological torture needs to stop. It is just common sense to open all the current lanes to speed the traffic and build more international bridges. We should aim to make a better world for people that follow the rules who are the future of the world and regular people who are contributing right now to our economy.

The majority of people who opt to take the 5 minute wait time by jumping the wall have a reason to do it with the outcome of been processed by immigration and gain sooner or later a legal status even if they get cough inside the US undocumented they will be deported but their case will be in process.

As of today immigration laws that grant legal status privileges to central America countries such as  El Salvador, Guatemala and Honduras and Cuba under the asylum status. (foreign assistance programs for the Northern Triangle). The problem is a deficient border process that need and upgrade. If we think when was the last time an international bridge was in construction and how much the population density has rise!

This is not a legal counsel of any kind you can look for your self on the internet for any question you have regarding immigration forms and process. The country of Mexico does not have immigration treaties as it has with other countries from central America so they jump Mexico to get to the US but the waiting time at the border it is obvious they are opting to avoid.

So the solution it is to build more international bridges along the border to speed the immigration process of this people and have a record of who they are and so on. This applies to the South Mexican border too.

The importance of an open border for economic business is crucial for the economic growth of a country other wise may collapse economically. The word busies means a flow of money goods and services even these people are potential workforce for different industries. Right now the price of the avocados rise 34% from the border crossing wait time. The worse are the inhuman circumstances for the people waiting in line, they could be pregnant woman, children, sick people that need they medication on time, they are no public toilets and leaving your car there is unsecured.

A complementary solution to more international points of entry are to place automatic passport check kiosk to help to do the job of border officers and the current international bridges waiting times become shorter almost as fast as jumping the wall. This applies to the South Mexican border too.

Please correct me if my opinion is wrong with any of this information to further questions ask an immigration lawyer.

Bilateral border lifestyle should not be delayed or interrupt and people who are following the legal path should not be punished so hard with long border crossing wait time of 5 hours by the lack of international bridges and automatic passport control machines.

Is been 21 years since the last bridge was build in the border with El Paso/Ciudad Juarez even with the installation of touch screen for automatic passport control, or new registry for the people form Cuba, El Salvador, Honduras, and Guatemala which are the privileged countries for asylum visa. The inefficiencies of the crossing border waiting period remains for the people crossing in their vehicles for legal bilateral purposes and for the trucking industry. The Population in El Paso TX is of 840,410 with a growth rate of 0.39% and Juarez 1 501 552 +1.43%/year. To rehabilitate the economic flow in the border with Mexico the infrastructure of more international bridges along the border would be optimal for the US economic plans with world.

“The United States and Mexico share a 2,000-mile border, a half a trillion dollars in annual trade and 1 million legal border crossings each and every day,” Trump said during his visit to Mexico Aug. 31. “We are united by our support for democracy, a great love for our people and the contributions of millions of Mexican Americans to the United States.”

From the need of Asylum visas in the US granted to privileged countries such Cuba, Guatemala, Salvador and Honduras the Mexico border would need to build more international bridges as well and use the automatic passport control or register screen touch machines to help them speed the process.

Border crossing wall time of 5 minutes vs the bridge wait time of 5 hours is the obvious reason to build more bridges and to instal touchscreen machines for Automatic Passport Control and to help the immigration officers to process the asylum visa petitioners and to maintain the healthy economic bilateral flow at the all borders.

In this video one can see asylum petitioners following the law by surrendering them selves by the foot of the wall instead of doing it inside the US international office to initiate their status process. The officers have to go out on the field to cover this need reason why the international points get short staffed and for the long waiting times at the international bridges.

Note; The content on this article its focus on the legal migration and the current inefficiencies of the points of legal entry because the topic of comprehensive immigration reform or illegal immigration it is not the purpose of this article.

People get confuse when they hear open border with illegal immigration, that is wrong and incorrect. Open border in my opinion is open more available lanes at the current bridges, to build more bridges.

Actually, right now they have improvise, if they only allow vehicles too, the flow will be faster not the 120 minutes wait time at 2:00AM because only one or two lanes are open. This Rustic yet functional international point of entry was created out of a need.

This article is looking after the people with legal entry waiting unfairly long hours for lack of infrastructure and short staff. I am watching this video with the flow of people everywhere and makes me think that we live in a world that is a live and the flow of people it is only logical and necessary to prosper.

How about if Developer: The Related Companies L.P. Oxford Properties Group Inc. who made Hudson Yards would help out build the next series of international bridges to track the way into the future of international commerce.

I been monitoring the border crossing wait times for the past week and they had done and extraordinary job on lowering the wait time. However, to be realistic and effective we should aim for passenger vehicles wait time to less than 5 minutes as it is right now for pedestrians on the weekends. Also, pedestrian crossing times on school days need to be less than 5 minutes it is only ethical and moral to do so. The solution it is to open the 14 available lanes instead of only 6 at all bridges.

Unfortunately, as we see right now the commercial lanes are closed for staff shortage increasing waiting times. Problem that can be solved with the implementation of technology to assist the available staff.

Yes, the wait times got lower but the cost per crossing got higher now at the Paso del Norte Bridge the passenger vehicles are charged $30 Mexican pesos when it used to be $26 pesos, last month. The funds available for international bridges infrastructure plus technology acquisition to improve crossing time and processing conditions could be calculated.

Here is the Podcast

“Yesterday, Border Patrol agents apprehended the largest group of illegal aliens ever: 1,036 people who illegally crossed the border in El Paso around 4am. Democrats need to stand by our incredible Border Patrol and finally fix the loopholes at our Border!” President Trump3:16 PM – 30 May 2019

“This line of ilegal immigrants are to potentially be processed under the asylum/family privileged category what President Trump new immigration proposal want is to switch the entrance under merit instead. International points of entry and legislation have’t change over 30-50 years legal cross wait times at the bridge are 80 min long, b/c out of 14 lanes are 7 open, these people had to be process in the open because they cant’t fit at the international points of entry. The neck bottle of economy can be fix with more lanes opened, infrastructure, and technology lowering wait times of 5 min.

I agree with economist John Law (1671-1729) who believed that money was only a means of exchange that did not constitute wealth in itself and that national wealth depended on trade.”- Shirley Henderson

not just from the South border but it might be more institutionalized than of jumping the walls. Speeding points of entry for legal crossings is our focus #border “- Shirley Henderson

There you have it my name is Shirley Henderson and I want to see you succeed in every area of your life. I am on the side of human kind. See you guys back.

This is people with US legal entry with a border crossing wait time of hours.

Trump Threats Push Up Mexican Avocado Price Most in a Decade

The price of Hass avocados from Michoacan, the heartland of Mexican production, jumped 34 percent on Tuesday, the biggest gain in a decade. Prices, which probably spiked as importers boosted purchases ahead of potential border issues, could double or triple if Trump makes good on his threat, said Roland Fumasi, an analyst at Rabobank. The Mexican Hass price was unchanged on Wednesday.

McDonald’s to Acquire Dynamic Yield, Will Use Decision Technology to Increase Personalization and Improve Customer Experience.

Images used in this article are used for educational purposes and belong to their owners.

In this video one can see the unhappy people at the south border of Mexico and Guatemala for lack of fast immigration registry.