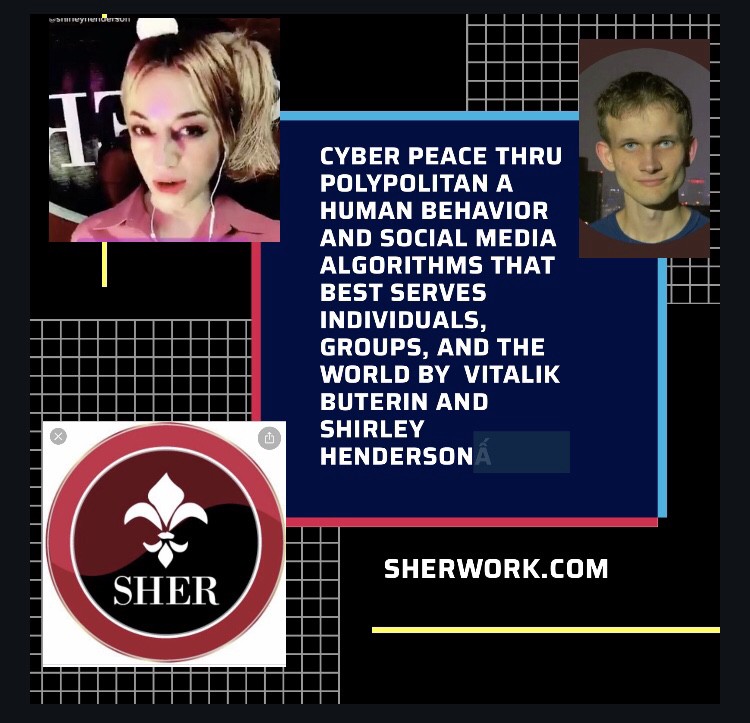 Cyber Peace thru POLIPOLITAN human behavior and algorithms in social media that best serves individuals, groups, and the world by Vitalik Buterin and Shirley Henderson

The “polypolitan” ideal is that we want to have many intersecting groups, with none of them becoming far more dominant than the other, because that’s the structure that’s most likely to preserve both global cooperation *and* individuality.

I’m definitely a proponent of this.- Vitalik Buterin

I support The POLYPOLITAN interaction as ideal b/c in the cyberspace where we live sounds about as logic, satisfactory, & complementary giving a solution to the argument of cooperation vs conflict at the individual & global level. We just invented CYBER PEACE Vitalik Buterin.-Shirley Henderson

Sorry to burts the (name) social media post wars. Let me explain, the algorithm is blind for negative or positive comments is just a code design to feed users account w relevant content to them in the case of social proof/ popular accounts are built w negative/ hate comments

So in real life social proof in social media is builded with disapproval comments that create an organic growth to X social media account. I hear all the time accounts with over 1M followers complaining about the hate on their comments, ppl in reality don’t like their content.

The controversial, disliked, and out of the ordinary in real life an account content is, the algo will work on its favor, helping that account to be more popular. We are also familiar w the tribalism among social media wars within the apps wich go beyond real life

Before you @VitalikButerin and I invented CYBER PEACE w the accepted term of POLYPOLITAN for a X individual, to move back & forth in the cyberspace X groups (APPS) enhancing it’s global experience & helping its chosen environment to grow. Before the option was delete the account.

Many users opt to delete their social media accounts b/c they are feed up of negativity in correlation w depression & anxiety rates. increased among social media users, again the algo is naive/ blind to the relevant content the algo is only doing its job to feed disliked content.

It’s clear that the more interactions regardless of negativity/ hate and account has the algo will create more organic growth. That’s why accounts that everybody agrees with have zero interactions the algorithm can’t helped organic grow that way.

With the POLYPOLITAN ideal cyberspace accepted behavior which could serve as a freedom of speech, freedom of assembly, freedom of religion and now FREEDOM OF CRYPTO we no longer have to hide our affiliations for fear of rejection from one group to the other in between APPS.

In the human history we have never been more in contact thru cyberspace with people with different ethnicities, sexual preferences, economic backgrounds, intelectual levels, skills sets, talents, and physical attributes. No wonder why unique individuals receive so much hate.

Now that we agree that no longer serves us a mentality of individuals vs collective b/c we chosen a POLYPOLITAN as an ideal structure, we should design social media ALGORITHMS that feed. behavior among individuals, groups, and world ???? for more peaceful cyberspace interactions.-Shirley Henderson

Conclusion: Thinking about conflicts in terms of this three-layer structure (individual vs group vs world) is often the correct frame for better understanding things that thinking about eg. individual vs collective misses.-Vitalik Buterin

Notes: I noticed that all the resources authors are making a call for #policymakes pleading for #socialmedia to make an #algorithm less polarized on user feeds and for a design that is less addictive by removing the like ✅notification bell ????The following count.

Another thing that I understand from the resources authors is that they want users to know that social media is an advertising for profit platform not builded for the benefit of the user. This article did not touch topics such as privacy in social media or buy likes & followers.

Without a doubt the algorithms are assisting an obligated polarization loopholed echo chamber reducing heterogeneity viewpoints needed for #DEMOCRACY democracy. Absolutely the adoption of #POLYPOLITAN algorithms that promote a diversity of feeds will create Cyber Peace. -Shirley Henderson.

There you have it friends, my name is Shirley Henderson and I want to see you succeed in every area of your life. I’m on the side of humankind. See you guys back. Subscribe to my newsletter, and YouTube channel. I love you all.

How Algorithmic Confounding in Recomendation Systems Increases Homogeneity and Decreases Utility: This is done with machine learning AI arxiv.org/pdf/1710.11214…