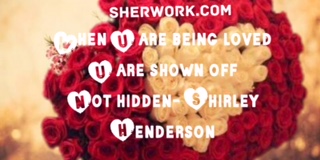 Sher on Cheaters are scared of Valentine’s Day

When you are being loved

you are bing shown off

Before I express my opinions on any of my articles and theories as they teach me on my masters degree in psychology, I apply the scientific method, ever since it has become a way of thinking and processing ideas. This afternoon I was reading an article that got me thinking I will rephrase as I posted

at my Facebook page “The National Retail Federation was dependent on 54% of the population to spend this valentine’s Day 2017 I8.2 billion. I wander what was the real number spended because I did not see neither on Facebook, Instagram, or Twitter women bragging about their flowers, bears, jewelry, candy, or greeting cards. The exception was my sister she did give her love one candy, flowers, and all from the list, yeah! I do not know what to think about this and today, I saw the flowers shops and they still got the valentine’s day bears left over from yesterday mmmmmm I don’t know about this one, is a riddle.” -Shirley Henderson

OMG you guys I do not know how to put it into words! Is just a hard topic is very simple I find a correlation on break up texts before valentines day and a low spend in the economy on gifts by the lack of evidence on people not posting it and making it public by tagging people on social media in valentines day. Which make me conclude that people do not want to be publicly in a relationship with a specific person, they want to look single to have multiple options, or not get cough cheating. That’s it! is easy, people want to appear single on social media to have multiple choices so they do not want to buy, or receive gifts that will compromise their “single” relationship status to other friends and followers on social media. So the lack of gifting on valentines day is not an economy issue is a tag issue. Before social networks existed it was harder for cheaters to get caught cheating now with the relationship status, when your boyfriend, or girlfriend does not update the relationship status to “in a relationship with x since xx/xx/xxxx that is a red flag. Other couples even share accounts just to be and share user names and passwords just to be betrayed when the partner is getting a secret account with a “single” relationship status. But even when the cheater has a single status he/she will like to remain under the radar by not getting tag by someone who is exited about valentines gift and having false expectations about the reality of the relationship and tagging left and right putting in jeopardy the scam of the cheater. Notes: Valentine’s Day is like a ultimatum date for the relationship to be stablished and when the guy brings you flowers and the girl gives you a bear is pretty obvious the he/she wants the relationship to be a step further and everybody shall know about it. So, when the person you are dating did not gift you anything on valentines, think about it! If she/he does not want to feel proud of you in public which now public is social media that is a red flag. So think about what kind of relationship you want to be in. A serious one, an open one, a friends with benefits, a loyal, a polygamous, or not at all but always be honest. Honesty is the best policy. We are all learning but lets do it civilized and make the new way of dating nice and sweet, thank God for social networks to make the dating more open so less surprises. There you have it, hopefully this helps! My name is Shirley Henderson and I want to see you succeed thank you for visiting my blog follow me on social media and subscribe to my youtube channel and to my news letter, I love you all send you a kiss. -Sher