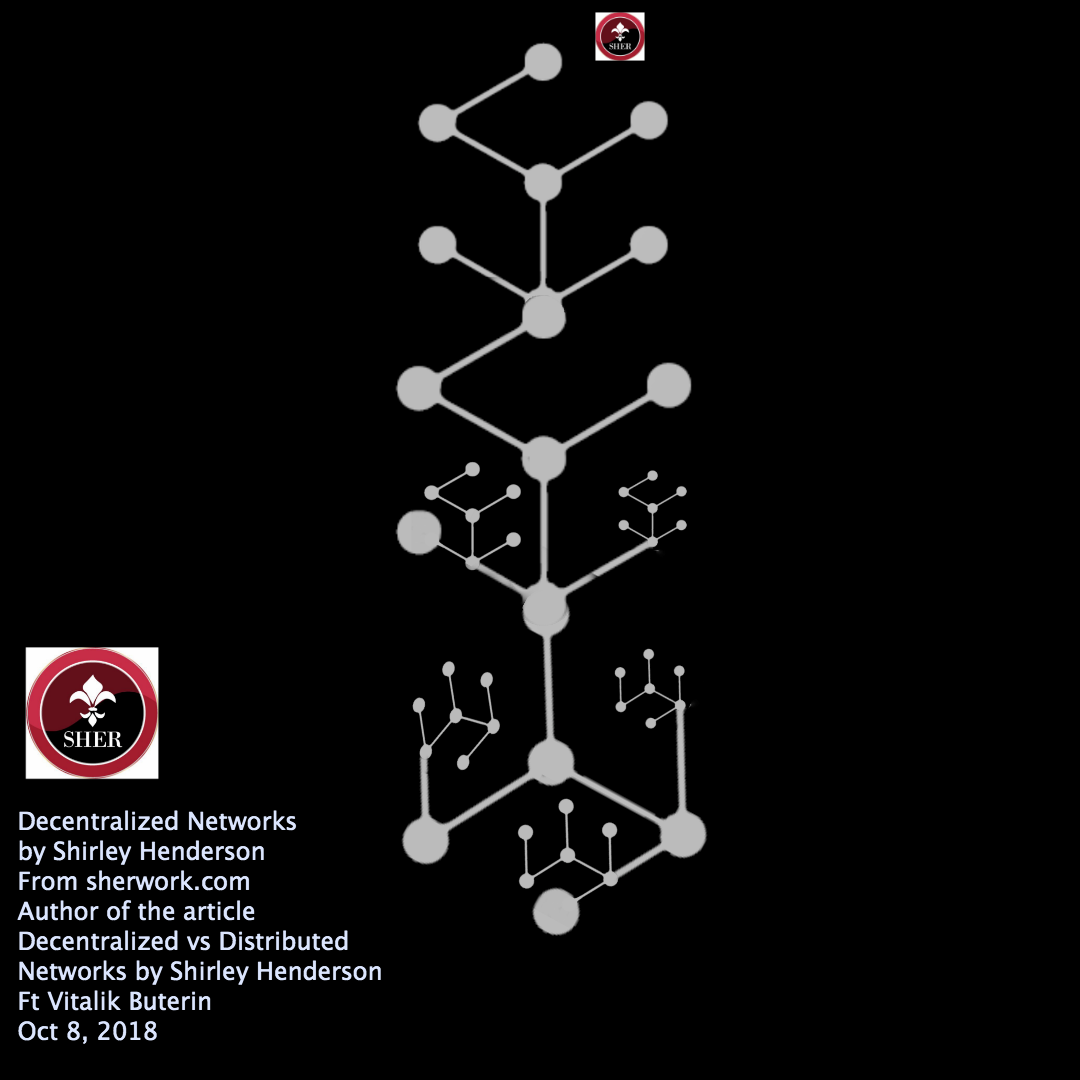 Hello everybody is 4:31 AM but I had to finish this new Decentralized Network Model

I realized the graphic need it an upgrade so I modified the entire chart as we know it from the sequence order and of course the diagrams where I illustrate my vision of what I learned from Vitalik Buterin on his article The Meaning of Decentralization. I believe the three networks can grow infinite this is the root 2D image but this can be used in a 3D model with movement and even distortions, and colors. The differences in dimensions represent the distance you see them bigger because they are close to the sight and small because they are far away, or even with low internet frequency as with radio transmission transactions in the blockchain.

There you have it from now on this chart can be used to educate anyone who is interested in learning about computer networks such as centralized, distributed, and decentralized in a more visual manner. This is my contribution to the growth of the blockchain implementation. Please use proper citation to give me credit. My name is Shirley Henderson and I want to see you succeed, I am on the side of human kind. See you guys back.

This was the first modification to the Distributed Networks

Now is the complete and upgraded chart for the Networks

How can you tell when a decentralized system is real? When it works on the blockchain because that system by default operates without the control of a single entity.

A NETWORK NOT WORKING ON THE BLOCKCHAIN = CENTRALIZED NETWORK SYSTEM

ANY NETWORK WORKING ON THE BLOCKCHAIN =DECENTRALIZED NETWORK SYSTEM

Thanks for visiting my blog. My name is Shirley Henderson and I am on the side of human kind. See you guys back

This is brought to you by 99chart.com where you can buy my art subscribe to my newsletter and my youtube channel.

article Sher on DApps vs XApps by Shirley Henderson

Hi @VitalikButerin here you have Sher's Decentralized Network Model by Shirley Henderson for all your academic needs. I think the chart for the networks is finish and well represented according to your article The Meaning of Decentralization. Thank you https://t.co/L1RhezfHxj pic.twitter.com/iNRPU43SIw

Hi @VitalikButerin I was studying Distributed Network as you explained, I realized the graphic need it to be upgraded so I redesign the entire chart order network model as we know it. Please feel free to use it for all your academic needs. https://t.co/V8zQunGIMe #shersdesigns pic.twitter.com/ztJGNrbijr

Hi @VitalikButerin I created the Sher’s Centralized Distributed and Decentralized Network Category Formula by Shirley Henderson to distinguish from one another easily. You can use it for all your academic needs. https://t.co/01KvzIC19o #shirleyhenderson #sherarticles pic.twitter.com/q5DPR7GPEj

Hi Friends, happy to announce that my theory where I predicted how would it look a decentralized network on a 3d motion pic based on the 2D Sher’s network model that i designed in October 2018 is been confirmed by Preston Van Loop on August 2019.- Shirley Henderson

“1 year ago, we forked from go-ethereum into a clean slate. When we started Prysm, it was a subdirectory in a fork of geth. As time went on, we realized Prysm would be very difficult to merge back into geth so we forked! Look at the last 20mo of merged PRs building ETH 2”- Preston Van Loop.

“In October 2018 I designed The Sher’s Network Models by Shirley Henderson Now we have a visual of a decentralized network in 3D Motion. Just as I imagine it, thanks for sharing it
@preston_vanloon

. I’ll include your video on the resources at my article http://sherwork.com/?p=2460

@VitalikButerinand friends,
@preston_vanloon blockchain 20 mo sequence prediction on how would it look a 3D motion pic of a #decentralized #network Thanks everybody for their hard work, let’s keep going. They call us the dreamers yet we’re the ones that never sleep.
Hi @VitalikButerin
here’s a recap for: Sher’s Decentralized Network Model by
@Sher_Henderson

Shop for what you love at 99chart.com