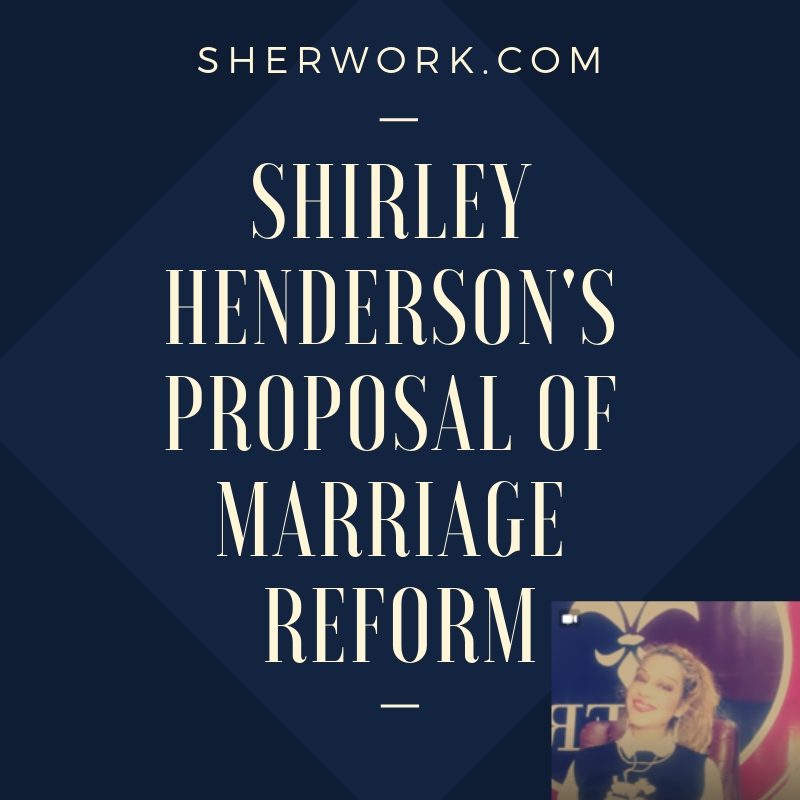 Listen to the podcast part 3

We need to give the marriage status a higher degree of care. To have a marriage license should be owned for people that bring commitment to the relationship.

So let’s make marriage a bit more difficult to obtain to make it more desirable to help people in their mate selection process.

The said reform would consist on a waiting period of one to two years after the issuance of the marriage lenience to legalize the union before the court. This will create a filter for the couple and they would have the opportunity to go on with the process of have the option to cancel the license before expires. That simple.

The two possible outcomes are the cancelation of the license, or get married. In the long hall the statistics will determine the positive outcomes. The results could be fewer marriages but also fewer divorces which in the end that is the goal.

The waiting period will help the couple to get to know each other better and in the Ireland country the Catholic church is predominant and the rule is not allowing of premarital sex.

This reform will positive impact the marriage and divorce statistics make in us into a more civilized humanity. The old tradition of having stable families can be possible to bring back now by rule of law with the waiting period of one to two years will help the evolution of the world because after a period of three to five years the rest of the world could predict positive outcomes and implement the rule of the one to two year waiting periods to get married world wide.

At first people might not accept it because they would think is too long but when they see the result from other couples who gone thru the process and had a good outcome if not optimal at least better than what we have now.

Because parents are not able to restrict the life of their children and unfortunately there is no restrain on cheating, irresponsibility, abandonment, domestic violence, drug addiction but it could be prevented. Putting a hold on a bad marriage forcing it to prolong the bad condition is a form of abuse and slavery forcing people to stay together will not work for the better people should be free to make better decisions and if they have problems making better decisions putting a time frame will help them to make those decisions. Like my mother say time will tell.

Lets make time do the hard work for the next generation of families and lets incentivize the marriage institution instead of penalize it.

We need to address the psychological aspect of the male by nature is a hunter and let’s think of the female perceptive what easy comes easy goes. So for both sexes, or any sexual preference things that take no effort to obtain they have little value to preserve and we can think of more sayings like why to buy the cow when getting the milk for free and so on but we are not here to offend anyone. We just want to use the knowledge that we have with the facts that we have and make a new way.

If we don’t change what we are doing we will continue having the same results, we need to change.

Who will benefit? Both the husband and the wife because they would get to maintain their sexual partner, their life partner, and the children born from them will get to have a chance to a better financial life, the entire family will have a more stable mind set, and emotional stability.

Society will have a more productive people who had the social control at home to make better decisions and will extend to a global reach on the positive side. Because technology wise the human has evolve faster then his mind and conscience could responsibly understand and is not bad that technology has grow so fast but we need to hold ourselves a bit because we are not machines we are humans.

With this marriage reform the creation of family union programs should be incorporated in the process like in a school program but in parenting class, cooking class, therapy and health to create a community that will support each other until and beyond the two year mark arrives.

With the implementation of the one to two year waiting rule to get married plus the family union outreach the expectations of the humanity give a positive vibe from my point of view.

One researcher determined that a single divorce costs state and federal governments about $30,000, based on such things as the higher use of food stamps and public housing as well as increased bankruptcies and juvenile delinquency.

What’s the worse that it can happen if not implemented the one to two year waiting period to get married rule? It could be that with the fast evolution of technology and social media to pick a la carte sexual partners the outcome of the eradication of the family institution is a possibly within the next 20 years. Also, with technology and the health advances the human life expectation is longer. However, this will represent a lonely society the rates from divorce in the next 20 years would translate to the millennial generation being the first who opt to not have children and not get married by choice having a to live their old age alone, interacting in VR possibly. This will be a topic for another article but we can look threw this window and see what we want to have for our selves and the world. Please share and give me the proper credit since it is an original work made by me.

My name is Shirley Henderson and I want to see you succeed in every area of your life. I am on the side of human kind. See you guys back

“In the US every state has a mandatory waiting period of X time after the issuance of a marriage license and it has an expiration date. I would suggest in Ireland make it one to two year waiting time. Two outcomes to cancel a license or get married.” Shirley H.

“I still think that two years is too long to allow divorce in Ireland. After 2011 with the bloom of social media many marriages won’t even last 2 years. We need to look into incentivize the marriage institution to make it worth staging married not punishment. This topic needs att”- Shirley Henderson

“Maybe make the rule to take 2 years to get married building some kind of filter. This way only people who really want to get married would pass the barrier of time. I think in order for the world to get better the marriage institution needs to be reformed. This is urgent.”- Shirley Henderson

Disclaimer: This is not a legal advise