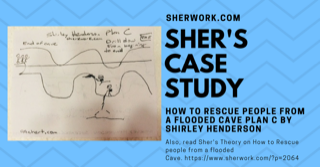 Title: Sher’s Case Study on how to Rescue People from a Flooded Cave by Shirley Henderson

Title: Sher’s Case Study on how to Rescue People from a Flooded Cave by Shirley Henderson

This is the first time one of my theories graduates to become a case study in such as short time.

Based on the emergency of this process we had the ability to test and confirm one of my three plans to rescue the Thailand Boys who were trapped in a flooded cave starting June 23, 2018. But I learned about the news until July 07, 2018 when Elon Musk twitted that he was sending aid the the site.

I made an evaluation and though the kids been there for way to long and needed a method of scape fast before the monsoon rains approached even harder. This was the first time something like that happened before in social media, the information was little but I was fortunate to watch a news video where they had a map of the caves from the inside the severity of the flooding and the long distance, it all was so clear for me so I begin writing my theory and making the sketches of what I had in mind. I did not hesitate to upload the blog post immediately because I knew that time was of the essence and this problem it need it a solution fast.

The message I want to give today is that we are not good to people because we expect them to be good to us in return that poor mentality is the result of todays corrupt society. We decide to help those we can even when we know they might never be able to pay us back. This is the type of civilization we should strive for, a world we are proud of. We all have this things to do with our time but no matter how, or where we can help each other we should at least try. The best illustration for this, is how Elon Musk designed a mini submarine in his attempt to rescue the boys because one of the problems was a priority to be solved. It was that the boys did not know how to swim. Elon and his team of engineers in person deliver the submarine if they decided to use it now, or in the future.

Since this case study is the after math of the Sher’s theory of how to rescue people from a flooded cave here is the link to read the full paper.

In here, I will post the plan C which was the one they used out of plan A, B and, C To read all of them click this link

1.-Depending on the oxygen supply we must position a team of divers in each chamber to drill underwater forcing the water level to go down by drilling the ground.

2.- In each chamber the team must to open up the cavity space from the lower areas not the upper area of the space to be open to prevent cave ins/collapses to make free access the necessary under the circumstances make an evaluation of the necessary dimensions to work on.

3.- This method requires one chamber at the time, starting from entrance/exit of cave to the end, that way the oxygen requirements will be provided by the force of nature instead of artificial on the majority.

4.- This method will allow the team, when is time to evacuate to be done in one long move

Note: Before proceeding please make an analysis of percentage of success based on an evaluation of time when this task is executed.

I am not done yet, wait. There’s more!

by using a rope to pull them out while they can float with the life saver best.

Other wise if we drain completely the cave channel they will have to climb to much while their biological conditions are degraded. By this conclusion the opening cavity to make a pathway should be the priority. With care no to collapse the entry way from each chamber.

Note: The success of the rescue will be in draining the water down by drilling down the ground. Yeah, I think the safes way is to drill down.

There you have it! Thank you, to everybody involved in this heroic work. Let’s keep making the world a better place because we are one.

My name is Shirley Henderson and I am on the side of human kind. See you guys back.

Disclaimer: The following plans should be evaluated by engineers, I Shirley Henderson or sherwork.com do not assume the responsibility if fatalities in the attempt. I am not licensed to give any professional advice regarding rescuing people in caves, this is an emergency and this is just my opinion so I will leave it to your consideration and the authorities.

That was in theory, in practice they did it as a text book, the details where collected from the news media. They added oxygen tanks with face mask for each kid to swim the underwater areas. Even when they only drill the ground in the first chamber, to drain the water down the cave, breaking down the path and pumping out the water in the entrance. Allowing the boys to advance the most with the least effort, they only had to dive the first part and walk freely the second part of the cave trail from the back to towards the exit, according to Plan C instructions. That way the rescue was completed in three days after I published it. Everybody did a great job, extraordinary execution, experts volunteers form all over the world came to the rescue one way or another we all wanted to help in the way that we could, and we did.

There you have it! I hope more prevention mechanisms are enforced in that areas such as closing the caves for visitors starting the monsoon season the same thing with other similar areas all around the world. I will leave this here as my legacy to the world. My name is Shirley Henderson and I want to see you succeed in every area of your life, see you guys back.

This article is brought to you by 99chart.com

Sher’s Theory on How to Rescue People from a Flooded Cave https://www.sherwork.com/?p=2064

Hi @elonmusk I made a theory w/3 rescue options 2 help. Make an evaluation on which one will serve the highest probability of success depending on time, oxygen, rescue team ability, and equipment to perform. Blessings to all the involved. Follow this link https://t.co/4EeS9pIbiO https://t.co/voce8z8eOE